Welcome to my occasional newsletter, mostly relating to books, history and literature.

My centenary celebration of Allen Clarke’s Moorlands and Memories 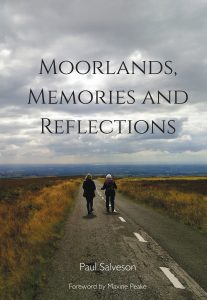 continues to sell well and get good feedback from readers. I’m going to put a ‘simplified’ version (with fewer photos) out as a kindle book. It will be priced at about £9.00. At the moment only my novel The Works is on kindle, price £4.99 – over the next few months other titles will be added (see below). See https://www.amazon.co.uk/Paul-Salveson/e/B086T48HGC/ref=dp_byline_cont_pop_ebooks_1

I much prefer selling my books directly or through local shops. Last year I Iaunched my ‘Bolton Bicycling Bookshop’ which both keeps me fit and avoids the ‘white van’ syndrome. It’s also nice to say hello to people on the doorstep. Quite a few shops selling my books are still open; there’s a full list on the website but local recommendations around Bolton include the Justicia Fair Trade Shop, the Pike Snack Shack on the way up to Rivington Pike, A Small Good Thing

greengrocers on Church Road and Markland Hill Post Office. I’d love to support more independent bookshops and hopefully they’ll soon be open again  – George Kelsall in Littleborough, Wright Reads in Horwich, Carnforth Bookshop and Pendle Heritage Centre, Barrowford. They are going to need all the help they can get in getting back on their feet so please support them. Other outlets still sought, welcome suggestions.

My fortnightly feature in The Bolton News’ Looking Back pages is a good way of promoting ‘alternative’ local history to a wider audience. The last one was about Bolton (and Lancashire’s) links to the Russian textile industry in the 19th century. There’s lots of material out there, with potential for a full-length book. Many Bolton families went out to

Russia from the 1850s and some settled. Lancashire expertise was required to set up and maintain textile machinery, so firms like Hick Hargreaves, Dobson and Barlow and Mather and Platt’s (of Oldham) were in great demand. The feature can be downloaded here: https://www.theboltonnews.co.uk/news/19087834.bolton-know-key-role-russias-textile-revolution/

Back in the 1980s I helped my friend Derek Moffitt, a railway shopman, do some research on Lancashire herbalists. He ended up getting an MSc but then suddenly died of a brain tumour. He had started on a very rich seam of social history and I’m hoping to continue some of his work. The first stage is a Bolton news piece

which will appear on February 24th. Pre-eminent amongst working class herbalists (or ‘medical botanists’) was Richard Lawrence Hool who lived in Farnworth from around 1870 until his death in 1920. I’m looking for more information on Hool and his colleagues, including Charles Hassall, also of Farnworth, and examples of local women herbalists.

Socialism with a Northern Accent

Nearly ten years ago, Lawrence and Wishart published my Socialism with a Northern Accent. John Prescott wrote a very kind foreword and it was launched on an unsuspecting, and largely uninterested, public. Things have moved on and there is a bit more interest in the regional agenda so it’s probably time for a new edition. I’ll do it under the ‘Loominary’ imprint and re-work some parts of it. Much of it is a historical

overview stressing the distinctiveness of the socialist politics that took root in Lancashire and the West Riding from the 1890s. However, there will be an extended chapter on contemporary regionalist politics and the potential for extending regional democracy in the North of England. The provisional title is Socialism with a Northern Accent: how our radical traditions can shape a new North.

My book on Lancashire’s links to Walt Whitman (With Walt Whitman in Bolton – spirituality sex and socialism in a Northern mill town) had what was effectively a re-reprint in 2019. I’ve been meaning to do a ‘proper’ new edition for a while and lockdown has given me a bit of time to bring it 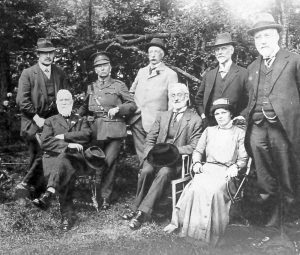 up to date. The book that will hopefully appear this Spring will be in two parts – a new edition of the ‘Bolton’ Whitman book and a more general essay on the influence of Whitman on socialism in the North of England. It will complement the new edition of Socialism with a Northern Accent. It will be priced at about £15 and also be on kindle. Meanwhile, I’m selling the 2019 edition off (which is very nicely illustrated) at half-price (see below).

My book on the life and writings of Allen Clarke was published under my old imprint ‘Little Northern Books’ in 2009, as Lancashire’s Romantic Radical: the life and writings of Allen Clarke/Teddy Ashton. I’ve virtually run out of the original version and I’ve been working on a revised edition. Fortunately he hasn’t been doing much since he died in 1935 so it shouldn’t be that big a job to update, though I will add a few 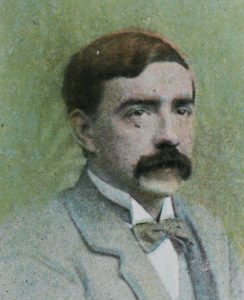 interesting snippets about his life as well as the course of ‘Teddy Ashton Studies’ in recent years. I’m going to try to keep it down to an affordable cost and possibly sell it with Moorlands, Memories and Reflections, which it complements, as well as a stand-alone book in print and kindle. Aiming to bring it out July/August but watch this space.

The second (2008) edition of this introduction to the social history of railways in the North is also virtually out of print and I’m hoping to do a new version bringing it up to date. I’ll keep some of the photos and add a few new ones and have it available in print and kindle. It will tell

the story of rail in the North from the earliest days to nationalisation, privatisation and the current half-way house we’re in. I’m aiming for publication in September but if it can be done sooner, so much the better.

My old website (www.paulsalveson.org.uk) has been languishing in the sidings these last couple of months as my writing has been transferred to www.lancashireloominary.co.uk. It has now been revved as my photographic gallery – ‘Paul Salveson Photography’. It’s a way of displaying a selection of my photographs taken over the last 60 years (literally – and some of the best date from the mid-60s). There are

several themes including BR steam, industrial landscapes, Lancashire moorlands, industrial steam and the contemporary railway. I may get round to selling some images, either just as digital images or prints. Access to view the gallery is unrestricted: http://paulsalveson.org.uk/

This new short story is about the day in the life of a footplateman in the days of steam – early 1900s in fact. It’s about a young loco fireman working a freight from Bolton to Wakefield and back, and the wider social and 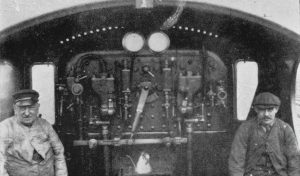 historical background. It is based on historical fact though the story itself is fictional. It’s on the website and is illustrated (thanks to Lancashire and Yorkshire Railway Society and Noel Coates).  http://lancashireloominary.co.uk/index.html/this-months-short-story

A new issue of The Northern Weekly Salvo is now available. It’s the usual rag-bag of stuff including the ongoing debate about ‘Englishness’, walks around the Wigan Coalfield, the fascinating history of the Haigh Foundry and short reviews of new books.

Will Yo’ Come O’ Sunday Mornin’? The story of the 1896 Winter Hill Trespass

A hidden horde of the 1996 edition history of the now-famous Winter Hill Mass Trespass (much bigger than Kinder!) was re-discovered last year and is being sold at £5, with all proceeds to Bolton Socialist Club. 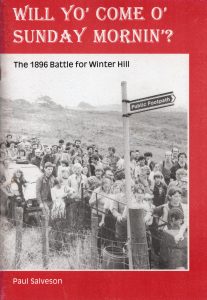 Plans for the 125h anniversary this September are coming along well and there’s a ‘Winter Hill 125 Facebook’ group. There is a zoom-based meeting on the evening of Friday march 12th. You can buy the book through Lancashire Loominary’s order form http://lancashireloominary.co.uk/index.html/order-form

This is a new innovation, after spending a day sorting out all the duplicated (and triplicated) books in my library. Most – but not all – are railway titles and there are some very nice bound volumes of The Railway Magazine, with one dating back to 1899 (a bit bashed, admittedly). Some of the bound volumes are, however, in very good nick. There’s also some Lancashire history and general political stuff.  Details here: http://lancashireloominary.co.uk/index.html/second-hand-books

These are now sold out – sales have raised about £500 for Bolton NICE and Bolton Hospice. A big thanks to all who helped, especially Hilary Fairclough and Martin McMulkin (a progressive alliance in the making?).  I’m thinking about doing more and welcome any comments and requests for re-orders.

Bolton Station Community Partnership has published its first book of poetry – The Platform Anthology. The publication contains the eight winning poems from the recent borough-wide competition and all the other entrants who were shortlisted. Beautifully illustrated by Allison 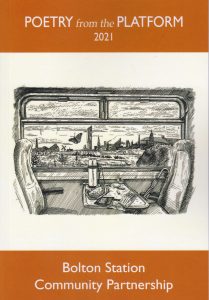 Timmins who holds a University of Bolton School of the Arts Masters Degree, the volume represents the creative work of over fifty people who either currently live, work or study in Bolton or who have previously done so.

The competition was funded by Transport for Greater Manchester who have supported numerous Bolton station projects over the last two years.  Julie Levy, Chair of the Community Partnership, and Dave Morgan from Live from Worktown collaborated over the last nine months to launch and manage the poetry competition. Supported by the University’s acclaimed Creative Writing Department, the competition was held in two phases ensuring an equal chance of success for all age groups.

A virtual celebration event is being planned with the University of Bolton where the eight winners will have an opportunity to read their poems to the audience. The event will also feature two experienced local poets who will read some of their work and discuss how they go about writing their own poetry. Winning entries will be display on the station.

Copies of the anthology can be ordered from Julie at boltonstationcdp@gmail.co.uk and cost £5 plus postage and packing.

Paul was born in Bolton in 1952, one day before the Harrow and Wealdstone rail disaster. He has had a varied career, mostly to do with railways, mixed in with adult education, journalism, politics and community development. After a 25 year exile he is back home in Bolton. He is a visiting professor at the Universities of Bolton and Huddersfield and chairs South East Lancs Community Rail Partnership

One reply on “Lancashire Loominary news no. 3 March 2021”

Do you know if there are any recordings of the Bolton area dialect? I haven’t heard it since my grandparents died and now I’m older I’m curious about what has been preserved.