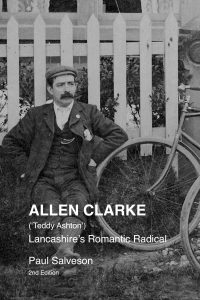 A completely updated edition of the 2009 biography with fresh material and a new chapter on his railway writings. A great companion to Moorlands, Memories and Reflections (see below). I’m doing a special offer – order both books and you only pay £25 in total (free local delivery or add £4 for UK postage). See ‘ordering my books’ or just ring me on 07795 008691. 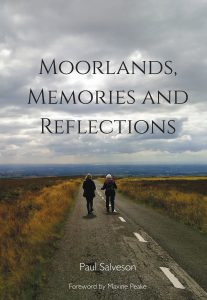 A hundred years ago, Allen Clarke brought out his Lancashire classic, Moorlands and Memories. My book is a celebration of this unjustly neglected work which extolled the beauties, history and people of the West Pennine Moors. Clarke’s book was conversational, philosophical, entertaining and lyrical. My book covers some of the ground that Allen Clarke wrote about –handloom weavers, dialect writers, the Winter Hill ‘mass trespass’, links to Walt Whitman and that fearsome Lancashire creature, the boggart. He discusses Clarke’s links with Tolstoy and his attempts to ‘get back to the land’ and the great Barrow Bridge picnic in support of the locked-out Bethesda quarrymen in 1901.

Clarke was both a keen cyclist and walker. His original book includes rides and rambles through Rossendale and Pendle as well as around Rivington, Belmont and Edgworth, with associated tales. Paul adds in some stories from the last hundred years including ‘summer evenings with old railwaymen’ at Entwistle and Gandhi’s visit to Lancashire. And there’s lots more. If you love the Lancashire moors, its history and culture, you’ll probably enjoy this. It includes a foreword by Maxine Peake.

It’s now available price £15 plus £4 post and packing (but free delivery if in the Bolton area). If you prefer to support local shops, see the list of retail outlets in  ‘Buying my books’ page or download an order form here:

The Works (on special offer)

My novel The Works was published in March 2020, to coincide perfectly with the country’s lockdown. It’s set in the small Lancashire town of Horwich, mostly in the former railway engineering factory where I (briefly) worked. 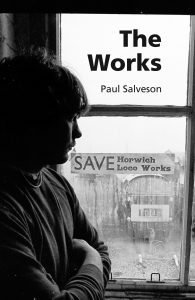 Much of the action takes place in the 1970s and 80s but the story is taken through to post-Brexit Britain in 2025. It’s about life in a traditional factory facing closure – the tensions and fears of being made redundant, as well as everyday life in a working class community. But it’s also about modern railway ‘politics’ and the potential for Chinese involvement.

It’s written, mainly, in the first person. The narrator is a union activist and communist. Part of the story is about his relationship with ‘Midge’, an office worker at the factory whose late husband died in an accident in the Works.

In ‘real life’ the Works did close and the site is being ‘re-developed’. In the novel, the factory is saved by a workers’ occupation and buy-out, with a scene where the riot police try to break the occupation. The novel  links the fictitious outcome at Horwich with the actual occupation and buy-out at Upper Clyde Shipbuilders, Glasgow. Some of the dialogue is in Lancashire dialect, reflecting shop-floor culture at the time. There’s a glossary to help readers unfamiliar with ‘Lanky’.

Please go to Order Form (above) for details of how to buy. It’s on special offer for just £6.

With Walt Whitman in Bolton – Lancashire’s Links to Walt Whitman. This charts the remarkable story of Bolton’s long-lasting links to America’s great poet. New bi-centennial edition published in May 2019.

Normal price £10.00 plus post and packing, available now for £6.  Bolton’s links with the great American poet Walt Whitman make up one of the most fascinating footnotes in literary history. From the 1880s a small group of Boltonians began a correspondence with Whitman and two (John Johnston and J W Wallace) visited the poet in America. Each year on Whitman’s birthday (May 31) the Bolton group threw a party to celebrate his memory, with poems, lectures and passing round a loving cup of spiced claret. Each wore a sprig of lilac in Whitman’s memory. The group were close to the founders of the ILP – Keir Hardie, Bruce and Katharine Bruce Glasier and Robert Blatchford. The links with Whitman lovers in the USA continue to this day.

Northern Rail Heritage. A short introduction to the social history of the North’s railways. Price £6.00 (very few left). The North ushered in the railway age  with the Stockton and Darlington in 1825 followed by the Liverpool and Manchester in 1830. But too often the story of the people who worked on the railways has been ignored. This booklet outlines the social history of railways in the North. It includes the growth of railways in the 19th century, railways in the two world wars, the general strike and the impact of Beeching. Currently being updated, a few copies of the old edition left.
Other Publications
Socialism with a Northern Accent (2010)
Railpolitik: Bringing railways back to the community (2012)
Both published by Lawrence and Wishart www.lwbooks.co.uk

For 2022, an idea that’s still evolving. Greater Lancashire – a series of linked essys on Lancashire as it was, is and might be. A book of short stories with a railway theme – The Station Clock and other stories...hope to have it out in June.

And finally, I’m planning to write another novel. Current ideas include life in a Lancashire industrial town in the 1890s and the rise of ‘ethical socialism’ and the Clarion cycling movement, but bringing the story to the present day. And/or a novel set in Farnworth – its rise, fall and rise. Watch this space and keep your chain well oiled.