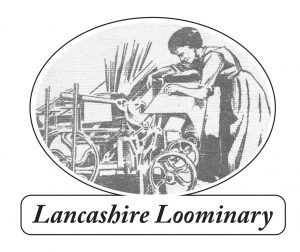 An occasional update from Lancashire Loominary

Hello, this is an update about publications and events at Lancashire Loominary, my modest little publishing business. It’s about publishing fiction and non-fiction on the history and culture of Lancashire (by which I mean all of it) and its people. It’s not about ‘the great and the good’ but so-called ‘ordinary’ working class people who did extraordinary things. I’ll do this roughly every 4-6 weeks. Let me know if you don’t want to receive it.

The original ‘Lankishire Loominary’ was published by James T. Staton in Bolton in the 1850s and 1860s. The name changed on a fairly regular basis; at one point it was ‘The Bowtun Loominary, Tum Fowt Telegraph Un Lankishire Lookin’ Glass’. But I like the alliteration of Lancashire Loominary and its textile connections. The reason you’re getting this is because you’ve either bought, helped or promoted previous examples of my work and I thought you might be interested in future titles. The coronavirus carry-on meant that the launch of The Works was muted to say the least. But hopefully Moorlands, Memories and Reflections will strike a chord with people in the centenary year of Allen Clarke’s masterpiece, Moorlands and Memories. But it still looks as though ‘public’ launch events will be difficult. Maybe an open-air launch on the top of Winter Hill? (only half joking).

This newsletter complements my Northern Weekly Salvo – here is the latest one: (http://www.paulsalveson.org.uk/2020/08/04/northern-weekly-salvo-283/) If you don’t already get it and would like to, please send me an email address.

Coming soon: the next production from Th’Loominary……… 2020 is the centenary of the publication of Allen Clarke’s Moorlands and Memories, sub-titled ‘rambles and rides in the fair places of Steam-Engine Land’. It’s a lovely book, very readable and entertaining, even if he sometimes got his historical facts slightly wrong. It was set in the area which is now described as ‘The West Pennine Moors’ It also included some fascinating accounts of life in Bolton itself in the years between 1870 and the First World War, with accounts of the great engineers’ strike of 1887, the growth of the co-operative movement and the many characters whom Clarke knew as a boy or young man.

My book is a centenary tribute to Clarke’s classic – Moorlands, Memories and Reflections. It isn’t a ‘then and now’ sort of thing though I do make some historical comparisons, and speculate what Clarke would have thought of certain aspects of his beloved Lancashire today. There are 28 chapters, covering locations and subjects which Clarke wrote about in the original book, with a few additions. It includes the Winter Hill rights-of-way battle of 1896 and Darwen’s ‘freeing of the moors’;  a few additional snippets about the Bolton ‘Whitmanites’, handloom-weaving, railway reminiscences, the remarkable story of ‘The Larks of Dean’ and Lancashire’s honourable tradition of supporting refugees (including the much-loved Pedro of Halliwell Road). The story of Lancashire children’s practical support for the locked-out quarryworkers of Snowdonia in 1900-3 is covered in some detail, including the remarkable ‘Teddy Ashton Picnic’ of 1901 in Barrow Bridge, which attracted 10,000 people. It will be profusely illustrated.

It will sell at around £25 depending on final costs for printing. It should be out in mid-October when I’m back from my birthday break on Skye. I will offer a modest discount to previous customers with option of home delivery if within cycling distance of Bolton (which for me is about 7 miles).

Late news…I’m delighted to say that Maxine Peake has written a lovely foreword to the book.

The Works: a tale of love, lust, labour and locomotives

I’ve had a steady flow of orders for The Works, my novel set mostly in Horwich Loco Works in the 1970s and 1980s, but bringing the tale up to date and beyond – a fictional story of a workers’ occupation, Labour politics, a ‘people’s franchise’ and Chinese investment in UK rail.  I’ve had lots of good reactions to it, with some people reading it in one session. The Morning Star hated it. If you want a copy I can offer it for £10 plus £2.50 postage to those of you on this mailing list. Please make cheques payable to ‘Paul Salveson’ and post to my Bolton address above or send the money by bank transfer (a/c Dr PS Salveson 23448954 sort code 53-61-07 and email me with your address). If you are local I can do free delivery by e-bike (so just a tenner). There is a kindle version available price £4.99 and you can also buy it off Amazon. See www.lancashireloominary.co.uk

If you’ve already read and hopefully enjoyed The Works it would be great if you could do a short review of it on my facebook page (Lancashire Loominary). Feedback on how it could have been better is also welcome, especially as I’m starting work on the next novel (see below). Here’s a review by Mike Pedler:

“I enjoyed reading The Works. It is a warm hearted (and counter factual!) tale of how the world-famous Horwich Loco Work is saved from British Rail Engineering’s attempted closure by a workers’ cooperative drawing inspiration from the Upper Clyde Shipbuilders. I enjoyed the descriptions of the local politics and trade union life of the 1970s and ‘80s before and during the Thatcher years. Populated by some admirable Lancastrian characters and underpinned by a strong belief in what working people can endure and achieve, it displays an optimism of the will much needed in our current crises.”

The Works is available in the following outlets – please support them!If you know of any local shop which might like to take my books please let me know. I do a third discount, sale or return.

The next big project after Moorlands is another novel. I’m trying to learn from the experience gained from The Works, including reader feedback. This one will be called The Red Bicycle and is mainly set in Lancashire in the early 1900s – featuring mill life, working on the railway, local socialist politics, the Clarion Cycling Club and ‘everyday life’ – but also having a modern, post-virus aspect too. The narrator, for part of it, is a bicycle. I’m aiming for an early 2021 publication date.

Look out for my features in The Bolton News

The Bolton News runs a local history supplement each Wednesday called ‘Looking Back’. I’ve started doing a regular feature, each fortnight, on different aspects of Bolton life. The last one (July 29th) was on Bolton’s trams (see https://www.theboltonnews.co.uk/news/18621143.boltons-first-rate-tram-service-kept-town-move ). The previous feature was on ‘The Colne Papers’, the newspaper train which ran through Bolton in the middle of the night, at great speed. It was also published in The Lancashire Telegraph, here: https://www.lancashiretelegraph.co.uk/news/18572514.paper-train-brought-news-high-speed-east-lancs/?ref=rss. This Wednesday, August 12th, it’s on the work of T.H. Mawson and his visionary plans for the development of Bolton and its surrounding area.

I write a regular column called ‘Points and Crossings’ for Chartist magazine, one of the brightest and most intelligent magazines of the left. A recent column was a critique of Labour’s nationalisation plans for the railways: https://www.chartist.org.uk/labours-british-railways-mark-2-is-a-dead-duck/. The current one has my thoughts on the cycling revival: stillborn or a new lease of life for the bike? Let me know if you’d like a sample copy.

The Settle-Carlisle Railway (2019) published by Crowood and available in reputable, and possibly some disreputable, bookshops price £24. It’s a general history of the railway, bringing it up to date. It includes a chapter on the author’s time as a goods guard on the line, when he was based at Blackburn in the 1970s. The book includes a guide to the line, from Leeds to Carlisle. Some previously-unused sources helped to give the book a stronger ‘social’ dimension, including the columns of the LMS staff magazine in the 1920s. ISBN 978-1-78500-637-1

‘Lancashire’s Romantic Radical – the life and writings of Allen Clarke/Teddy Ashton‘(2009). The story of Lancashire’s errant genius – cyclist, philosopher, unsuccessful politician, amazingly popular dialect writer. Normal Price £15  – can now offer it for £10 with free postage for previous purchasers of The Works. This book outlines the life and writings of one of Lancashire’s most prolific – and interesting – writers. Allen Clarke (1863-1935) was the son of mill workers and began work in the mill himself at the age of 11. He became a much-loved writer and an early pioneer of the socialist movement. He wrote in Lancashire dialect as ‘Teddy Ashton;’ and his sketches sold by the thousand. He was a keen cyclist and rambler; his books on the Lancashire countryside – ‘Windmill Land’ and ‘Moorlands and Memories’ are mixtures of history, landscape and philosophy.

With Walt Whitman in Bolton – Lancashire’s Links to Walt Whitman. This charts the remarkable story of Bolton’s long-lasting links to America’s great poet. Price £10.00 including post and packing. Bolton’s links with the great American poet Walt Whitman make up one of the most fascinating footnotes in literary history. From the 1880s a small group of Boltonians began a correspondence with Whitman and two (John Johnston and J W Wallace) visited the poet in America. Each year on Whitman’s birthday (May 31) the Bolton group threw a party to celebrate his memory, with poems, lectures and passing round a loving cup of spiced claret. Each wore a sprig of lilac in Whitman’s memory. The group were close to the founders of the ILP – Keir Hardie, Bruce and Katharine Bruce Glasier and Robert Blatchford. The links with Whitman lovers in the USA continue to this day.

Will Yo’ Come O’ Sunday Mornin? The Winter Hill Mass Trespass of 1896. The story of Lancashire’s Winter Hill Trespass of 1896. 10,000 people marched over Winter Hill to reclaim a right of way. Price: £5.00 (not many left). The Kinder Scout Mass Trespass of 1932 was by no means the first attempt by working class people to reclaim the countryside. Probably the biggest-ever rights of way struggle took place on the moors above Bolton in 1896, with three successive weekends of huge demonstrations to reclaim a blocked path. Over 12,000 took part in the biggest march. Only a couple left, but the forthcoming Moorlands, Memories and Reflections has quite a lot about it.

Socialism with a Northern Accent (Lawrence and Wishart)

This was my take on a progressive Northern regionalism, with a foreword by the much-maligned but admirable guy, John Prescott. Time for a new edition really.

Railpolitik: bringing railways back to communities (Lawrence and Wishart)

This is an overview of railway politics from the early days to semi-monopolies and current arguments for nationalisation, or co-operative ownership?

Paul was born in Bolton in 1952, one day before the Harrow and Wealdstone rail disaster. He has had a varied career, mostly to do with railways, mixed in with adult education, journalism, politics and community development. After a 25 year exile he is back home in Bolton. He is a visiting professor at the Universities of Bolton and Huddersfield and chairs Bolton and South Lancs Community Rail Partnership