Will Yo’ Come O’ Sunday Mornin’? The Winter Hill Mass Trespass of 1896

The stirring events of September 1896 were virtually forgotten for several decades. 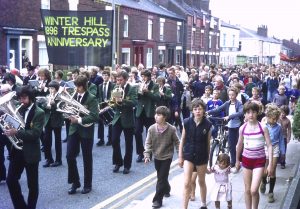 The story of the ‘Winter Hill Mass Trespass’ was rediscovered in 1982 and celebrated with a march over the disputed road. The event was repeated in 1996. I wrote a short history of the events, with the first edition published in 1982 and a second in 1996. I thought I’d completely run out of supplies, but I’m glad to say I was wrong.

anniversary coming up next year the discovery is very timely and complements the new Moorlands, Memories and Reflections which has a couple of chapters relating to it.

The ‘mass trespass’ was the biggest rights-of-way battle in British history (much larger than Kinder Scout) and mobilised thousands of Boltonians over three weeks in September 1896.

The book sells at £5 and you can go to my page on ‘buying my books’ for more details. All proceeds will go to Bolton Socialist Club, which was instrumental in organising the 1896 event and is still going strong. My new book Moorlands, Memories and Reflections has a full chapter on the events of 1896 – more details in ‘publications’ and ‘buying my books’.

A facebook group has been formed to promote the celebration next year is a broad-based community event: please sign up to ‘Winter Hill 125’