The next production: Moorlands, Memories and Reflections

This year is the centenary of the publication of Allen Clarke’s Moorlands and Memories, sub-titled ‘rambles and rides in the fair places of Steam-Engine Land’. It was published by Tillotson’s, publishers of The Bolton Evening News and other local titles which Clarke wrote for. It’s a lovely book, very readable and entertaining, even if he sometimes gets his historical facts slightly wrong. 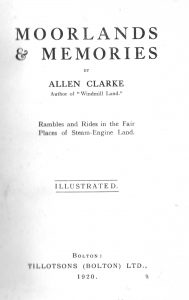 It is set in the area which is now described as ‘The West Pennine Moors’ stretching from Bolton to Chorley, Blackburn, Pendle and Rossendale. It includes some fascinating accounts of life in Bolton itself in the years between 1870 and the First World War, with accounts of the great engineers’ strike of 1887, the growth of the co-operative movement and the many ‘characters’ whom Clarke knew as a boy or young man.

The last time the book was reprinted was in 1986, thanks to the efforts of George Kelsall of Littleborough. I did a short introduction to it,which was based on the expanded third edition which he published himself in 1924. We launched it at ‘Teddy Ashton’s Well’ on the moorland road between Belmont and Hoghton, just south of Abbey Village.

Copies of the early editions, and for that matter the 1986 reprint, are difficult to come by. I’m contemplating doing a limited run of say a hundred (an appropriate figure for the centenary) numbered copies with a new introduction. It would probably sell at about £25, hardback. I’d welcome expressions of interest from readers who would be willing to buy a copy. It could work as a ‘subscriber’s edition’, the way many nineteenth century writers got their works funded. So please let me know if you would like to be a ‘subscriber’.

What is a bit more certain is the publication of my own centenary tribute to Clarke’s book, which will be called Moorlands, Memories and Reflections. It isn’t a ‘then and now’ sort of thing though I do make some historical comparisons, and speculate what Clarke would have thought of certain aspects of his beloved Lancashire today. There are 28 chapters, covering locations and subjects which Clarke wrote about in the original book, with a few additions.

It includes the Winter Hill rights-of-way battle of 1896, a few additional snippets about the Bolton ‘Whitmanites’, handloom-weaving, the remarkable story of ‘The Larks of Dean’ and Lancashire’s honourable tradition of supporting refugees. I will publish it as my second ‘Lancashire Loominary’ product and it will also sell at around £25 depending on final costs for printing. It should be out late September.

Paul was born in Bolton in 1952, one day before the Harrow and Wealdstone rail disaster. He has had a varied career, mostly to do with railways, mixed in with adult education, journalism, politics and community development. After a 25 year exile he is back home in Bolton. He is a visiting professor at the Universities of Bolton and Huddersfield and chairs Bolton and South Lancs Community Rail Partnership

3 replies on “Moorlands, Memories and Reflections”